Become a Legacy Leader at Otterbein.

Otterbein's strength today is in part based on the generous commitments of past supporters. You can make a powerful difference in our university's future by including Otterbein in your estate plans. Why not plan for your charitable giving now?

At Otterbein, there are several planned gift options. Many alumni and friends choose to make a blended gift. Simply put, this is a two-part charitable commitment of an immediate donation, as well as an estate gift. While our planned giving program addresses future priorities, we have urgent projects today where your support makes a huge impact. A blended planned gift is an example that accomplishes both the current and future needs of the university.

Honoring the year that Otterbein was founded, the 1847 Society provides special recognition to those individuals who have made a commitment to Otterbein through estate or planned gifts, regardless of size.

A commitment to Otterbein University through a planned gift will ensure a future of academic excellence.

Membership in the 1847 Society recognizes the outstanding benevolence in naming Otterbein as part of your legacy. In gratitude, we offer a variety of experiences that will show how yo have made a difference for Otterbein's future. This includes several events, lecture series, dialogues and special communications throughout the year from our leadership team.

With donor permission, we also recognize planned gift commitments in Towers magazine and on our website to acknowledge this ultimate gift as an example for others. 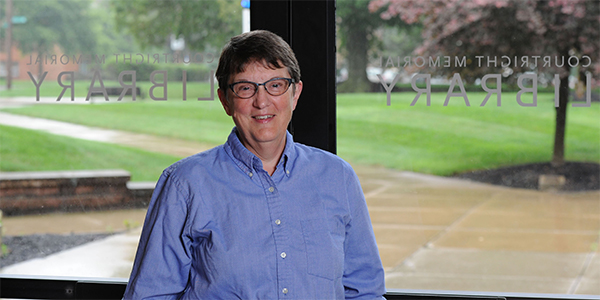 Lois has been standing with Otterbein for a very long time – ever since stepping on the campus of Otterbein University in the summer of 1990. She began her career at Otterbein as the director of the Courtright Memorial Library, a position she held until her retirement in June 2015.

"I try to give to every single type of campaign going on," Szudy said. "We are stronger together than we are apart." In keeping with the campaign spirit and combining two of her passions, the library and horses, Szudy made a sizable bequest as a part of the Otterbein "Where We STAND Matters" campaign to establish the Lois F. Szudy Library Endowed Fund and the Lois F. Szudy Equine Endowed Fund. "People say I'm a very giving person," Szudy explained when asked about her generosity. "I do tend to give of myself. I always was the helper kid. Somebody needed help, I was there. From the time I was a teenager. The neighbor needed help. I was there helping."