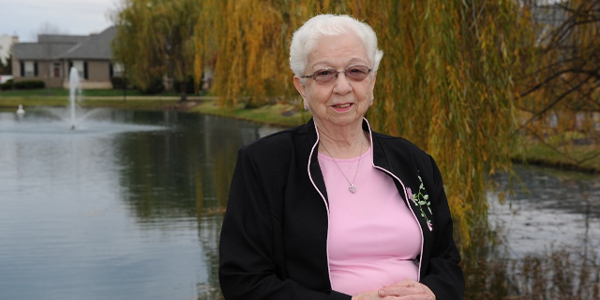 Talk with ElDoris McFarland '53 at some length, and it becomes clear why support for teaching at the elementary education level is the focus of her philanthropy at Otterbein.

The retired kindergarten teacher lights up when recalling some of her classroom experiences, including the year when she developed a dinosaur-themed program to help her students get excited about learning. It included making clay dinosaurs by forming, firing and glazing them with colors, singing songs, dancing, writing stories about the amazing prehistoric creatures, and a field trip to the old Memorial Hall in downtown Columbus.

"I was known as the dinosaur lady," ElDoris says, adding one student's mother even crocheted a brontosaurus for her. "I still have it. That was quite a year."

She spent 40 years teaching kindergarteners in Columbus City Schools before retiring in 1992. Now her commitment to teaching and the youngsters still dear to her is being extended by the ElDoris McFarland Scholarship that she created with a cash gift to Otterbein in 2006. The income from the fund is used to provide scholarships for undergraduates majoring in education with a focus on grades K-4.

El Doris has regularly contributed to the fund since then, and the scholarship will be fortified with a substantial estate designation she made to the University in 2014. That's in addition to her loyal giving for decades to Otterbein's Annual Fund.

"I've been fortunate," ElDoris says, "and I like the fact that I can go ahead and do something for future students."

President Kathy Krendl says ElDoris' support of Otterbein, particularly her creation of the scholarship for future teachers, demonstrates a strong belief in the difference that educators can make in the lives of their students.

"ElDoris was a gifted teacher who helped several generations of kindergarten students begin to experience the joys of learning and to become successful in the classroom and in their lives," President Krendl says. "Her teaching career and steadfast support of her alma mater is an inspiration for all us at here Otterbein where we strive to be a model community of educators, leaders and learners."

ElDoris says her interest in teaching began to take shape when she was about seven years old and started helping a disabled neighbor girl who was not receiving any formal education learn the basics. ElDoris decided she wanted to become a teacher when she was in the sixth grade.

"My teacher, Mr. Rader, did such as good job," she remembers, "and teaching just sort of became my thing. I took to it."

An elementary education major at Otterbein, ElDoris took classes in the morning, worked as a cashier in the afternoon to pay her way through college, and studied at night. As a senior, her professors let her take final exams early in December so she could accept a kindergarten teaching job in Columbus that began in January.

ElDoris spent the next 40 years working with five- and six-year-olds in that urban school district. The challenges were many - one year she had two classes a day with 42 students in each class - but ElDoris found her work rewarding.

"I really enjoyed the kids," she says.

Since retiring, ElDoris has maintained a busy schedule. She has sung for many years in a retired teachers choir and one at Stonybrook United Methodist Church. She is active in the New Albany Lions Club, including 12 years as secretary, and Order of the Eastern Star and used to be an avid bowler.

ElDoris also loves to travel. She's visited all seven continents, with a trip to Antarctica with a group led by iconic Columbus Zoo & Aquarium Director Jack Hanna a highlight. Her cozy condo is filled with mementoes, including quite a collection of refrigerator magnets, from her many trips.

It's been a rewarding life, and ElDoris says the education she received at Otterbein enabled her to get started with her teaching career. More than 60 years have passed since then, but she still likes what Otterbein stands for.

"We're still holding to high moral values," she says. "I think people think it" s a very good school. I'm proud of that."