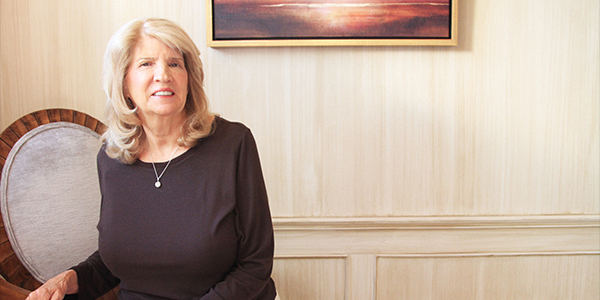 It seems fitting that a course entitled "The Emerging Woman" is what launched the long and important relationship between Annie Upper '86 and Otterbein nearly 40 years ago.

A Westerville resident back then, Annie saw an ad in a local paper for the noncredit course at Otterbein. She thought the class sounded interesting and worth wedging into a life already brimming with the responsibilities of being a mother and helping build Donatos Pizza into a hugely successful pizzeria chain with her then-husband, Jim Grote.

"I ran over to Otterbein to sign up," Annie remembers. "In the middle of the course, I realized I was doing really well and would have an 'A' so I decided to become a student."

Thus began a nine-year journey of juggling the duties of raising four children, helping run the family business and taking a class or two at a time at Otterbein. Annie's hard work and perseverance were rewarded in 1986 when she earned a bachelor's degree in psychology with a minor in sociology.

"The whole experience opened up my mind and my world," she says. "I grew up in an age when some people felt women shouldn't go to college. That's what made me so hungry for Otterbein."

The University has benefitted greatly from Annie's long-standing relationship with her alma mater. It includes her serving on the Alumni Council and a four-year stint as a University trustee. She has also been most generous with her financial support, whether it has been gifts to the Annual Fund, funds for special projects such as the Equine Science campaign and Science Building improvements, or creation of an endowed scholarship for women returning to college.

Annie has also taken a stand to support Otterbein's comprehensive $50 million campaign whose funding priorities are access and affordability for students, campus renewal and building a model community. Her commitment of $1.5 million - $1 million from her estate for scholarships plus a $500,000 gift for the Grove pedestrian mall project near the Campus Center - is the largest of its kind from a single donor for the "Where We Stand Matters" campaign.

"I really believe in Otterbein," Annie says. "It's the perfect size, the campus is beautiful, and I love the leaders there. It's an easy place to get to know people and be one-on-one with your professors. That made a big difference for me since I had been out of school for so long. I found the professors were willing to go all out to help me."

She sees her commitment to fund scholarships as a way to provide access for future students to all that Otterbein offers, including the caring support she received from faculty members. She remains especially appreciate of the tutelage she received from Albert Lovejoy, a sociology professor who helped her land an inspiring internship at the Marysville Reformatory for Women.

Annie still finds the Otterbein campus to be an energizing place and likes how the Grove project will enhance that. As envisioned, the project will create a pedestrian mall through the closure of Grove Street between Main and Home streets. The goal is to create a central gathering spot that connects the campus, community, Otterbein's traditions and physical beauty.

"The Grove will create a very calm and serene place for students walking to and from class," Annie says. "It's really important for me to see that on campus."

It's easy to understand why. Annie has spent much of the past 20 years helping people relax and take a step away from the pressures of the world. That was inherent in the mission of Gentle Wind Books and Gifts for Conscious Living, which Annie owned and operated in Columbus from 1997 to 2010. It was a place where customers could expand their minds and explore inner peace and spiritual growth.

As a volunteer, she has worked alongside mental health counselors and at a women's shelter for victims of domestic violence in Naples, Fla., where she lives part of the year. She is also a founder of Amethyst in Columbus, which provides a safe, stable environment in which recovering drug and alcohol dependent women can work toward and maintain sobriety.

"I'm a life-long learner," Annie says, crediting Otterbein for helping her start her along her path of education and service. "Sometimes you go to a place and feel like you belong. That feeling and the openness there were really important to me."

In her view, Otterbein continues to stand for integrity and leadership. She also especially appreciates its history of educating women and the current class of women in leadership roles. She hopes others will follow her lead and step up to support the Where We Stand Matters campaign.

"Education is so important," Annie says, "and we must protect the places that do it well and take care of their students. That's Otterbein."