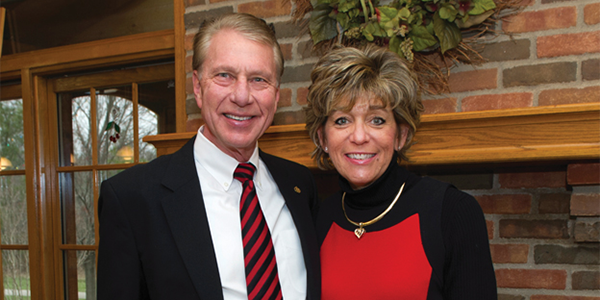 Chris '77 and Karen Kaiser have spent a lifetime of giving.

"In everything we have done, whether it is service or contributions, whenever we have given, we have received so much more in return," Chris said.

The couple, happily married for 32 years and living in Dublin, Ohio, has been giving to Otterbein University for over 35 years. In celebration of their 60th birthdays-Chris turned 60 in 2015 and Karen in 2016-they gifted the University a pair of charitable gift annuities. A charitable gift annuity involves a contract between a donor and a charity, in this case Otterbein, whereby the donor transfers cash or property to the charity in exchange for a partial tax deduction and a lifetime stream of annual income from the charity.

Chris, who serves on the Otterbein Board of Trustees and chairs the Audit Committee, recently retired as chief operating officer of OSU Surgery, LLC, the surgical practice group in the College of Medicine at The Ohio State University. Karen, who graduated from Ohio State in 1979 with a degree in elementary education, teaches second grade at Saint Brendan School in Hilliard, Ohio and is in her 37th year. The couple has two adult children, Kimberly, an actuary for Humana in Louisville, Ky., and Kevin, a national park service ranger.

Charitable gift annuities are nothing new for Chris, who majored in accounting and business administration at Otterbein. Following graduation from Otterbein, he worked 15 years at Haskins & Sells (now Deloitte) before moving to Ohio State. He is a certified public accountant. The Kaisers have set up several charitable gift annuities in the past, including one which provides a scholarship to Otterbein for a student who graduated from Saint Brendan School, her alma mater and where she teaches. Karen is also a board member of The Footsteps Foundation which was founded in 2007 and provides scholarship support for Catholic elementary students.

"A basic principle of investing is asset diversification," Chris said "There should also be a diversification in management of retirement income streams. With the decline in traditional defined benefit plans, the risk of investing assets to provide a monthly income stream in retirement has shifted to the individual. It is important to have basic monthly living expenses met by "guaranteed" income streams rather than financial market conditions. Charitable gift annuities provide a way to meet these monthly requirements and diversify the risk of investment management."

The bottom line for the Kaisers, however, is that their various charitable gift annuities support the missions of outstanding institutions.

"We feel like this is a great way to recognize institutions that really meant so much to us," Chris said. "We want to recognize Otterbein for what it has done for me and what it's doing for current students. The growth Otterbein has made and the people that it serves, the quality in both the faculty, staff and students are tremendous."